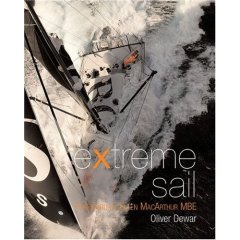 Just finished reading a great photo book called Extreme Sail and had to put down a couple quotes from some of the most famous “round the world” sailors.

Joshua Slocum, the Canadian who sailed around the world, single-handed over 3 years between 1895 and 1898: “If the Spray discovered no continenents on her voyage, it may be that there are no more continents to be discovered. To find one’s way to lands already discovered is a good thing and Spray made the discovery that even the worst sea is not so terrible to a well-appointed ship.”

He considered his trip as an exercise in seamanship and offshore tourism.

Sir Francis Chichester’s Log from Gypsy Moth IV during his solo circumnavigation with a single stop in Australia between 1966 and 1967 at the age of 64.

On rounding Cape Horn in 1967 in a gale: “I cursed the (Royal Navy ice patrol ship) Protector for hanging about, especially as I noted that she looked steady enough to play a game of billiards on her deck.”

A comment after being spotted loading supplies of gin and a hand-pumped Whitbread beer system in Plymouth: “Any damn fool can navigate the world sober. It takes a really good sailor to do it drunk.”

He celebrated by unwrapping his Aunt Aileen’s fruitcake.

Bernard Moitessier, the French sailor behind Knox-Johnston, on the 39-ft steel hulled Joshua wrote: “Joshua drives toward the Horn under the light of the stars and the somewhat distant tenderness of the moon … I no longer know how far I have got, except that we long ago left the borders of too much behind.”

After reaching the Atlantic, he abandonned the race and carried on around South Africa. Passing a British oil tanker he sent the message: “My intention is to continue the voyage, still non-stop, towards the Pacific Islands, where there is plenty of sun and more peace then Europe.”

Dame Ellen MacArthur from her log on the 22.9m trimaran B&Q during her 71 day 18 minute and 33 second circumnaviation that won the Jules Verne Trophy in 2005: “I feel like I’ve been beaten up this morning … stiff as hell and moving around with the speed and elegance of an arthritic robot.”

Fair enough, she had completed two mast climbs to repair damage in the Southern Ocean after 22,000 miles of sailing.