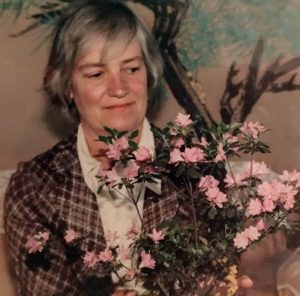 Patricia Barry Baker, devoted mother, artist, avid gardener, and lifelong learner, passed away peacefully in Portland, Maine last Saturday morning, May 19. She was surrounded by immediate family in the last few weeks of her life.
She was born in Boston in 1931, was raised in Brookline, Massachusetts and spent summers in Ames Hill, Vermont. She graduated from Miss Winsor’s School and from Barnard College, and studied Oriental Art at Radcliffe as a postgraduate.  She married Francis E. Baker in 1955 and raised her family in Farmington, Connecticut.  After her children had grown, she relocated to Newburyport, Massachusetts, where she pursued her love of gardening and developed a late stage career at the Commonwealth of Massachusetts. In this phase of her life, she also traveled extensively, including trips to China, Africa and Europe.
Always active and involved, she took leading roles in the theatre at Miss Winsor’s, and at Barnard College she was president of her class. Later she helped found the Farmington Art Guild and helped develop the Farmington Garden Club.
She loved art, culture and history, and when she traveled she brought back books, photos and detailed journals that she used to create slideshows of her travels.  She loved to present her experiences to schoolchildren and book clubs, and later created paintings from her photographs. One of her most memorable trips was in the early 1980’s, where she was part of the first organized tours of Communist China that included a trip down the Yangtze River.
Her family remembers her quiet strength and patience though life’s joys and hardships, and how she never lost her dignity, humility, grace or good humor.  She will be missed by all who were lucky enough to know her.
She is survived by two brothers Dr. Herbert Barry III (Pittsburgh, PA) and Robert Barry (Windham,Maine), four children and nine grandchildren.  The family invites you to join them in honoring her life at her beloved family summer home on Ames Hill in Marlboro, Vermont, Saturday, June 9, at 2:30 pm.
Obituary in the Hartfod Courant