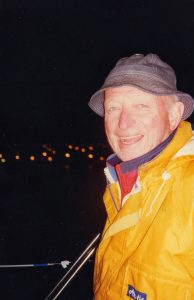 Hello everyone, for those of you that don’t know me I am John Baker, Frank Baker’s son, and thank you for coming out today and showing your support.  It means a lot to all of us.

Right after my father passed away a friend of mine sent me a great quote — it said basically “no one should be afraid of dying, our biggest fear should be never living.”

We definitely don’t have that problem with Dad — he did more before he was 35 than most people imagine doing in a lifetime.

And this isn’t a boast, it is a gift.  This means we can celebrate his life and do what he’d most want us to do — learn from it to make our own lives richer.

Most of us know that he was CEO of Andersen Group, but did you know he was hired as CEO at the age of 30 and held that job for over 45 years — even though the offer letter clearly states it was only a 2-year contract?

One story I heard was that when an important defense contractor came through to evaluate the company, he had  my mom and his neighbors from Farmington fill out the back benches to make the company look big enough to get the contract.  It must have worked, he took the company public as as “space stock” and then diversified by building it into a holding company that bought and sold over 10 other companies over the years.

In 1997, just before turning 70, he took Andersen into the newly opened up Russian market.

In 2000 he took over a business that had a contract with the Mayor of Moscow to bring cable broadband to the city.  He raised foreign and local investment and when he sold that business in 2007, he sold all of the assets of Andersen Group with it.

And that is how he then made time to work on a little storm ravaged condominium association, Baytree, in Vero.

It is an incredible set of achievements, and demonstrates a successful career, but I don’t think we should be content to just remember what he did, we should work a little harder and try to capture who he was.

There is no doubt Dad was confident and capable, but he was also adventurous.

During the summer between his two years at business school, he and his French roommate got a set of sponsors to buy them an MG convertible so they could drive it from Boston to Rio de Janeiro.  Remember it was 1954.  There weren’t highways between New York and Chicago, much less Lima and La Paz. Armed with only a set of press credentials Dad got from someone, they drove through areas controlled by communist guerrillas in Guatemala and witnessed the revolution that followed.

While they were in Brazil, the dictator of 30 years died and Dad used his press pass to take pictures of the funeral and file them with the US papers.

And this entire trip was just 100 days over the summer break.

Obviously it helps on your adventures to be charismatic and Dad could definitely be convincing.

As an undergraduate trying to get on the Harvard Lampoon he convinced a group of friends it would be a good idea to “borrow” a 300-pound granite punch bowl from the Crimson (the grown up student paper at Harvard), and present it to the Mayor of Boston … while pretending to be a student group from Boston College!  It didn’t take long for the mayor to realize it was joke, and they all laughed with the journalists covering the event.  Yes, he made the Lampoon, and, yes, he made front page of the Boston papers.

There was something else that Dad cared about greatly and that was family.

When I think of my time growing up I’m always amazed to think of how incredibly active we all were.

When we went camping, we didn’t pull the car up to a nice camp site by a lake. We loaded up the station wagon – we called it the Momma Wagon — with dad, Karen, 6 kids, a couple friends, dogs, packs, boots, and parked at a trail head somewhere near North Conway and walked into the White Mountains for a week. Everyone carried a pack — big kids carried big packs, little kids carried little packs, the completely shocked Parisian daughter of his old roommate carried a pack, even Oliver, our golden retriever, had a doggie pack to carry his food.

Most week-ends we would work on the house on Deercliff road.  It was a great house and Dad loved making it better.  He was demanding as a general contractor, definitely.  I can clearly remember the light flipping on ‪at 8 am no matter what time I got dropped off the night before.  A bowl of Raisin Brand and Grape Nuts, instant coffee, and onto the day’s program.

We’d build stone walls.  We’d put up fences.  We cut the lawn with a golf course style gang reel mower you had to run behind hoping it didn’t pull you into the woods or off the cliff.

One summer he cleared an area of small brush and planted some meadow seed in order to create an “Alpine Swale.”  I’m still not sure that an Alpine Swale is real thing, but we created one and we loved it.  And when he would entertain folks from the YPO or family friends he’d say, “look, we’ve made an alpine swale.  Let me tell you what happens when you plant 1,000 crown vetch upside down — you get to plant them again!”

And he didn’t stop at the immediate family but brought in extended family and friends.  And friends’ families. Even ex’s, ex’s new partners and their families.  He was always inviting everyone up to do something.  He was incredibly inclusive.

This is because for families to be families they have to spend time together — and of course it being Dad that meant all of us, all together.

Together at night for dinner. Together every holiday week-end. Together around a campfire.  Together on a 40-foot sailboat.

When he got back to owning sailboats, he first bought a C&C 38 called Finesse and later the Swan 47 Commotion that he and Karen lived on for years. And he would bring as many people as he could get on those boats.

Of course the first thing he would generally do is go straight out to sea and start practicing mark rounding and spinnaker driills, completely oblivious to the fact that the boyfriend or roommate was turning an obscure shade of green.

Yes, it was his agenda but the trips were amazing.

Marblehead to Maine, Newport to Bermuda, Antigua to St Lucia, across the Atlantic, Gibraltar to Majorca — these were epic trips he made happen for himself, but also something he gave to us.

And it carries on with his grand kids also telling stories of sailing trips on the next generation of boats.

His love of including everyone is why he and Karen bought the house in Farmington, Eight Bells, that was big enough to hold us all, and why as the grandkids got older he added a family room over the garage.

This meant they could host Memorial Day barbecues and big Thanksgiving week-ends.  He could bring everyone together and watch the kids learn to swim, teach them to use a bow and arrow, or, of course, do yard work.

When you consider Dad & Karen owned that house for nearly 20 years, you see there is a set of kids that grew up going there.

These are the words that bring Dad back for me.

And if you are looking for that overarching lesson you can take from his life, I’d say it is simple: “it isn’t what you have that matters, it is what you do with it.”

Dad knew how to get a lot from everything he was given and everything he earned.  He was a great father, an inspiring grandfather, and an amazing man.

And we have proof he would not want us to be glum today.  As we reviewed his files we came across a hand written text from 2006 titled Funeral Preparation.  He wrote,

“I had a great life.  No sickness, did everything I wanted.  I have wonderful children, a fantastic wife who I love very much and I made a few bucks.  I would not ask for more, so lets celebrate!”