in Family by John Baker
Share
I’m looking forward to doing a few family posts in the next few weeks and months, and cleaning up this blog.  We can learn a lot from what people have done especially when their lives were as full of adventure and action as my Dad’s life.  And it is a given the most respect you can give someone is to remember their stories.
It also struck me that putting all of the memories up on Facebook is a pretty precarious move when you think of the longer term.   When the company decides to pivot and focus on virtual reality experiences, all of our beautiful text will be relegated to a small achive link in the footer.

I don’t think this old wordpress blog is likely to see that kind of change and should be pretty stable until we can get the memories into something really cool like a leather covered book.

Francis E. Baker, a pioneer in technology manufacturing, dies at 87.

Francis Ellsworth Baker, a pioneer in technology manufacturing, passed away peacefully on January 31, 2017 at 87 years of age after a brief illness. He was in Vero Beach, FL, surrounded by his wife and family.

As the CEO of Andersen Group, a venture capital firm, for nearly 50 years, Mr. Baker invested in and managed a series of businesses that brought new technology to their industries.

In the 60s he manufactured rocket guidance systems as part of the space race. In the 70s he developed time base correctors used in early TV. In the 80s he ran a business pioneering medical imaging. At the end of his career, he helped build out the cable network that provides internet connectivity across Moscow, Russia.

A hands on and charismatic leader, Mr. Baker took an active role in his investments building teams and securing contracts personally. His energy brought people together and helped them achieve exceptional goals. His approach was inclusive and he believed in creating a calm, clear environment to work through issues before acting on a decision.

His desire to capitalize on new opportunities was matched by a strong adventuresome spirit.

As early as 1954, while still a business school student, he and his French roommate, Jerry Fabry, secured a series of sponsors and drove an MG convertible from Boston to Rio de Janeiro filing newspaper articles during the trip and doing a speaking tour afterwards.

In 1997, as Glasnost opened up Russia, Mr Baker joined a small group of other Western investors buying a company that became part of VSMPO, the world’s largest producer of Titanium. This led him to explore both Russia’s undeveloped roads and it’s newly developing legal infrastructure as well.

Frank carried this spirit of adventure into his personal life.

He and his wife Karen took the family hiking across the White Mountains, skiing in Vermont and Colorado, and sailing on the New England coast. For eight years Karen and Frank lived on a Swan 48 sailing over 20,000 miles through the Caribbean, across the Atlantic and in Europe. His passion for sailing has carried on in his children and grandchildren.

Born in New York City, Mr. Baker attended Harvard College graduating cum laude in 1951 and was a member of the Phoenix Club, an editor of the Harvard Lampoon and part of the Hasty Pudding. He served as a Lieutenant in the US Navy, and graduated from Harvard Business School in 1955.  Having been appointed CEO at the age of 30, he was proud to be a member and active in the Young President’s Organization (YPO).  He also an active member of the New York Yacht Club and former member of the Eastern Yacht Club. Later in life he supported the Underhill Society and was a member of the Society of Colonial Wars.

He lived in Farmington and Avon Connecticut for over 30 years before relocating to Vero Beach, FL, in 1992 and for seven years he was President of the Baytree Condominium Association.

Services will be held at St. Augustine of Canterbury Episcopal Church in Vero Beach, FL, on February 11 at 11:00 am with a reception following at the Baytree Clubhouse. A second memorial will be held in Farmington, CT, later in the Spring. In lieu of flowers, the family asks donations be made to the National Multiple Sclerosis Society.

And quite an amazing location at the end of the business section.  I guess calling the newsdesk and besieging the obit team worked. 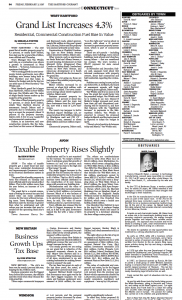 Thank you to the Hartford Courant.