With digital technology there are lots of times when an idea is strong enough that it can be a real product extension, not just a piece of marketing.

At JWT New York, the team has worked with Band-aid for years, and has a team that is focused on mobile technololgy.  Put the two together — and a few calls to Disney — and you get a new way to build on an existing partnership.

Now the question is can we take this to be an “enterprise solution” with all of the extensions in advertising, retail and the full digital eco-system? 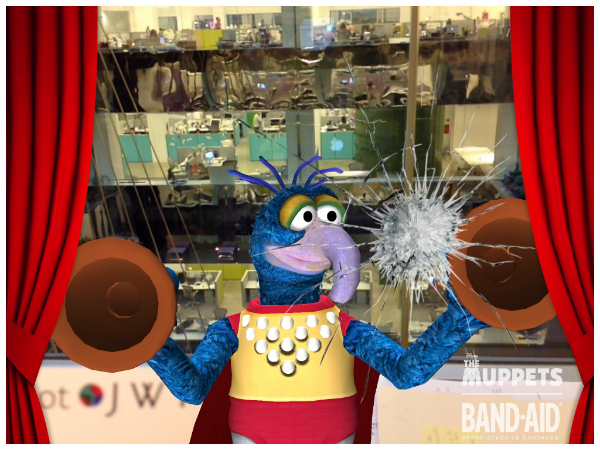 SOME leading brands of wound treatments were themselves bloodied by the economic slump, as consumers switched to cheaper store brands.

The Band-Aid Magic Vision app makes Kermit appear to emerge from a Muppets Band-Aid to serenade and console an injured child.

Store brands accounted for 39.4 percent share of the domestic market in adhesive bandages, gauze and first-aid tape in the 52 weeks that ended April 15, a gain of 2.2 percent from the year before, according to the SymphonyIRI Group, a market research firm.

Over the same period, the market share of Johnson & Johnson, with its Band-Aid brand adhesive strips and Johnson & Johnson brand gauze and tape, slipped 2.2 points, to 45 percent. (Band-Aid has about a 33 percent share, and the J.& J. brand has the remaining 12 percent.)

Because adhesive bandages are more popular in households with accident-prone children, Band-Aid has long licensed such characters as Barbie and Spider-Man to appeal to youngsters. Now the brand is introducing a marketing effort tied to Muppets characters and centered on that most charged of moments: when children have just skinned knees or elbows.

Band-Aid Magic Vision, a free app for iPhones and iPads, is linked to Muppets Band-Aids that already are widely available.